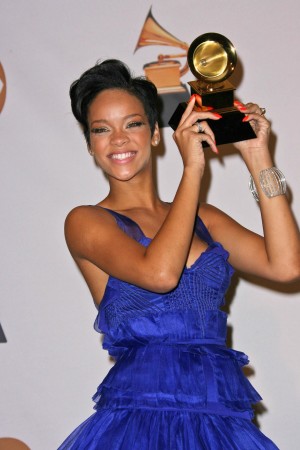 Singer and songwriter Rihanna was born Robyn Rihanna Fenty in Saint Michael, Barbados in 1988. Her mother is Afro-Guyanese and her father is of Barbadian and Irish descent. She has sold more than 200 million records worldwide, which makes her one of the best-selling artists in history.

Rihanna grew up in Barbados with her mother and father, and she sold clothes on the street with her father, who was addicted to crack cocaine and alcohol. Rihanna’s parents divorced when she was 14, and she was discovered shortly thereafter by a record producer on vacation.

Rihanna has won eight Grammys, eight American Music Awards and 23 Billboard Music Awards. She has had 13 number-one singles on the Billboard Hot 100 chart and was the youngest and fastest solo artist to do so. In 2012, Forbes ranked Rihanna the fourth most powerful celebrity of the year, as she earned $53 million between May 2011 and May 2012. Time also named her one of the 100 Most Influential People in the World that same year. In addition to her musical success, Rihanna is also a successful fashion designer and won the Fashion Icon lifetime achievement award from the Council of Fashion Designers of America.