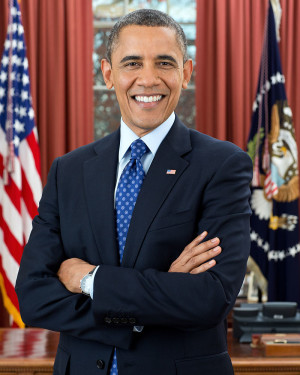 Barack Obama was born Barack Hussein Obama II in Honolulu, Hawaii in 1961. Obama is the 44th President of the United States and the first Black man to be elected to the Oval Office. Obama was born to a White mother from Kansas and a Kenyan father.

Obama’s parents divorced in 1964, and he was raised by his mother in Hawaii and Indonesia, and then by his grandparents back in Hawaii. Obama received his Bachelor’s degree from Columbia University and a law degree from Harvard Law School, and he became the first Black president of the Harvard Law Review. In 1995 he published a memoir entitled Dreams from My Father, which discussed struggles with identity in his youth, his estranged relationship with his father and his political activism as an adult.

In 1992, Obama led a campaign in Illinois called Project Vote, which successfully registered hundreds of thousands of Black voters. In 2003, as chairman of the Illinois Senate’s Health and Human Services Committee, Obama was able to pass legislation to monitor racial profiling and to require the video taping of homicide interrogations. As U.S. Senator, Obama became the Congressional Black Caucus’s only Black member.

Obama announced his candidacy for President in front of the Old State Capitol building in Illinois, where Abraham Lincoln delivered his famous “House Divided” speech. In 2008, Obama became the first Black man to be elected President of the United States. He ran virtually unopposed in the primaries during his re-election campaign, and he became the first Democratic candidate to win the majority of the popular vote since Franklin D. Roosevelt.

In 2009, Obama won the Nobel Peace Prize for his efforts to strengthen international diplomacy. In 2012, he was named Man of the Year by Time magazine, and a music video made from his concession speech “Yes We Can” won a Daytime Emmy Award. Obama also won Best Spoken Word Album Grammy Awards for audiobook versions of Dreams from My Father and The Audacity of Hope.

Obama identifies Black instead of Biracial; however, his memoir discusses his experiences as a mixed race youth. His identification is no doubt a personal choice and a reflection of race relations in the United States. Obama’s presidency has inspired Black people and Biracial people alike, as he has opened new doors and won the respect of millions of people around the world.